What do Yoga Journal, Governing magazine and the Twitter thread of acclaimed food writer Emily Nunn have in common?  Each recently highlighted something outstanding in NELA.  Here are the standouts:

One Down Dog yoga studios – in Eagle Rock, Silver Lake and Echo Park – are featured in the latest issue of Yoga Journal magazine, a leading authority on yoga.

The article, entitled “Noble Art,” discusses 16 murals at the three studios by muralist Joerael Numina. The murals are part of “Mobilize Walls,” a network of murals by Numina intended to convey unity in the face of the Trump administration’s divisive pursuit of an expanded border wall.

Yoga means union, said Numina, and “that’s what art does: It connects people, especially in a public space.”

Jessica Rosen, owner of One Down Dog, said the murals helped the studios “feel like a place you’d want to hang out in and connect and talk – not like, I come here and I leave.”

L.A. County Board of Supervisors

The Women in Tech hiring initiative passed recently by the L.A. County Board of Supervisors is featured in a recent issue of Governing, the online resource for state, city and community leaders.

The initiative calls for recruiting and training more women, ages 14 to 24, for tech jobs in county government, in part, by expanding the county’s internship program for at-risk youth to include training in an array of tech skills. 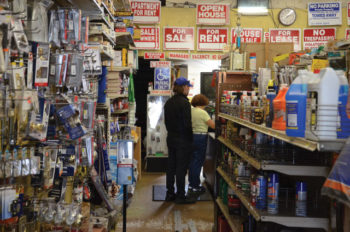 Tritch Hardware in Eagle Rock turned up recently on the Twitter thread of Emily Nunn, the acclaimed food writer and author of “The Comfort Food Diaries.”

Commenters were weighing in on an article by Nunn in Heated, an online food publication, about a beloved, multi-generational family-run grocery store, called Horton’s, in Nunn’s hometown of Galax, Virginia.

Sharon Miro offered this comment: “My Horton’s is a hardware store called Tritch – been here almost 80 years. You have to have help to find anything, because, well, 80 years. I go in, find what I need, wave at the counter and I get a bill whenever they think about it – handwritten.”