This was the L.A., circa 1980, of Nick Taggart, an artist in Glassell Park who used bright plasticine colors, smooth textures and a personal, street-level attitude to paint the early days of L.A.’s underground art and music scene.

And now, some four decades later, the Museum of Contemporary Art (MOCA) in downtown L.A has acquired two of Taggart’s paintings from that era — “Rochelle and Sandy” and “Fender Buddies.” Both paintings were part of “LA Stories: Painting and Drawing from 1980,” an exhibition last summer at the ODD ARK LA gallery in Highland Park. Neither work had ever been exhibited before the exhibition, said Dani Tull, who co-owns and directs the gallery with his partner Yvonne.

“He had pretty much shelved the work,” said Tull, who has known Taggart since 1990 but had never seen the paintings until Taggart shared them on his social media. “We started talking about doing an exhibition and I got the sense it’d be great to focus on the year 1980, the year before MTV launched and changed everything about art and music.” 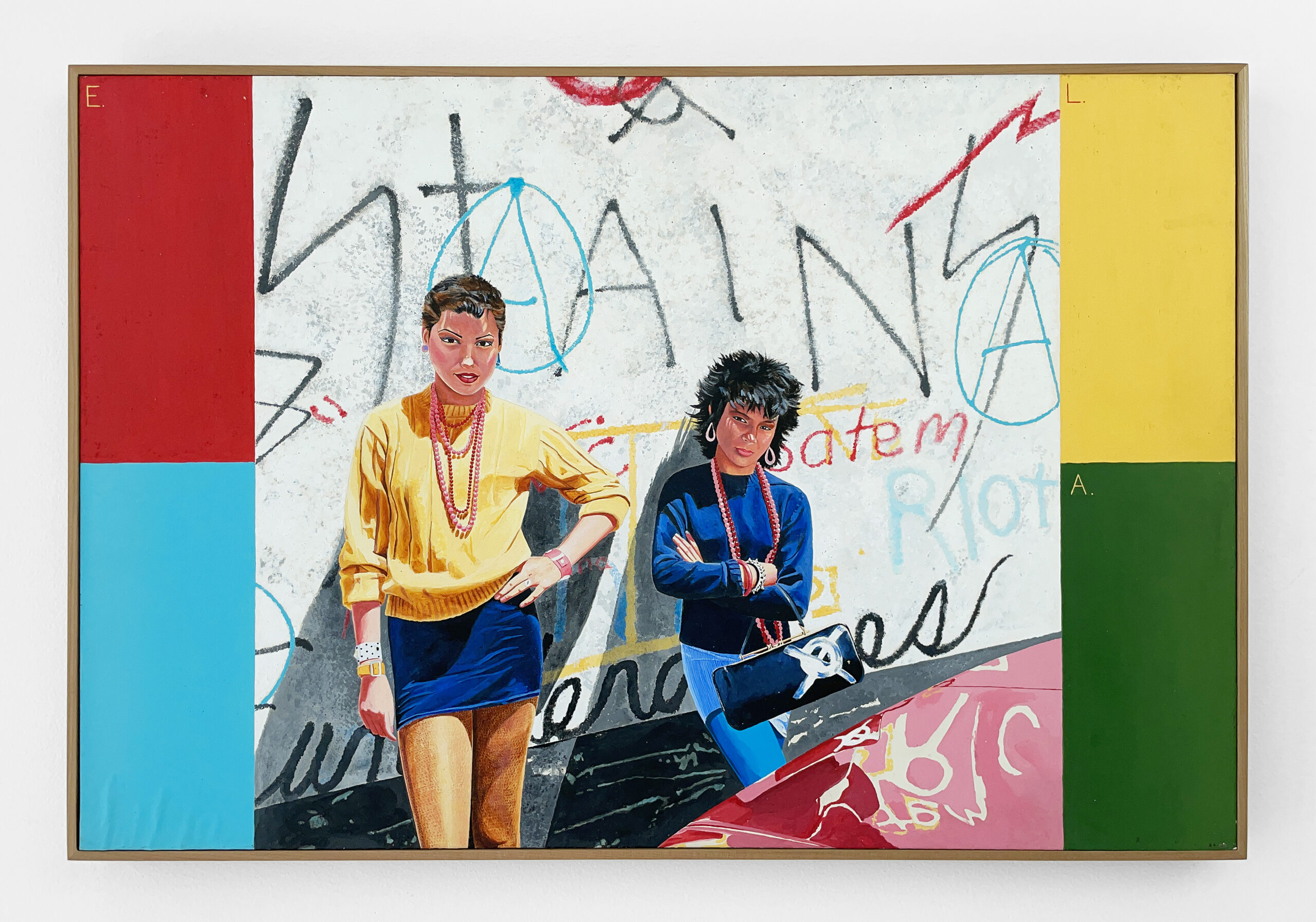 “Rochelle and Sandy” features two women Taggart met at an X concert at Self-Help Graphics in Boyle Heights. “Fender Buddies” features the band of the same name, whom Taggart knew. Vivid color and attention to detail are the hallmarks of both paintings.

“I was teaching myself to use acrylic paint,” said Taggert, of the two works acquired by MOCA. “I was painting friends, people I’d met, recording what was around me.”

In an email, Rebecca Lowrey, an associate curator at MOCA, described Taggart’s works as filling in a gap in the museum’s collection. She wrote:

“In pointing to the exceptionally porous boundary between art performance and music performance in this era, these two paintings add to MOCA’s growing but still-incomplete ability to tell the story of Los Angeles performance art, particularly that of downtown and East LA in the late 70s and early 80s, a period of music and art history that coincides meaningfully with MOCA’s own origin story.” (MOCA was established in 1979.)

Other works by Taggart from the 1980s also document his friends and figures from the art and music scene. One painting entitled “Jules” focuses on Jules Bates, the gifted photographer and photo editor for LA Weekly who died in a motorcycle hit-and-run in 1982. (Taggart said the painting was acquired by the Jules Bates Artrouble Center, an archive of Bates’ work at ArtCenter College of Design.) Another, “Gregory and Giselle,” depicts the late fashion designer Gregory Poe, including a translucent plastic raincoat designed by him. 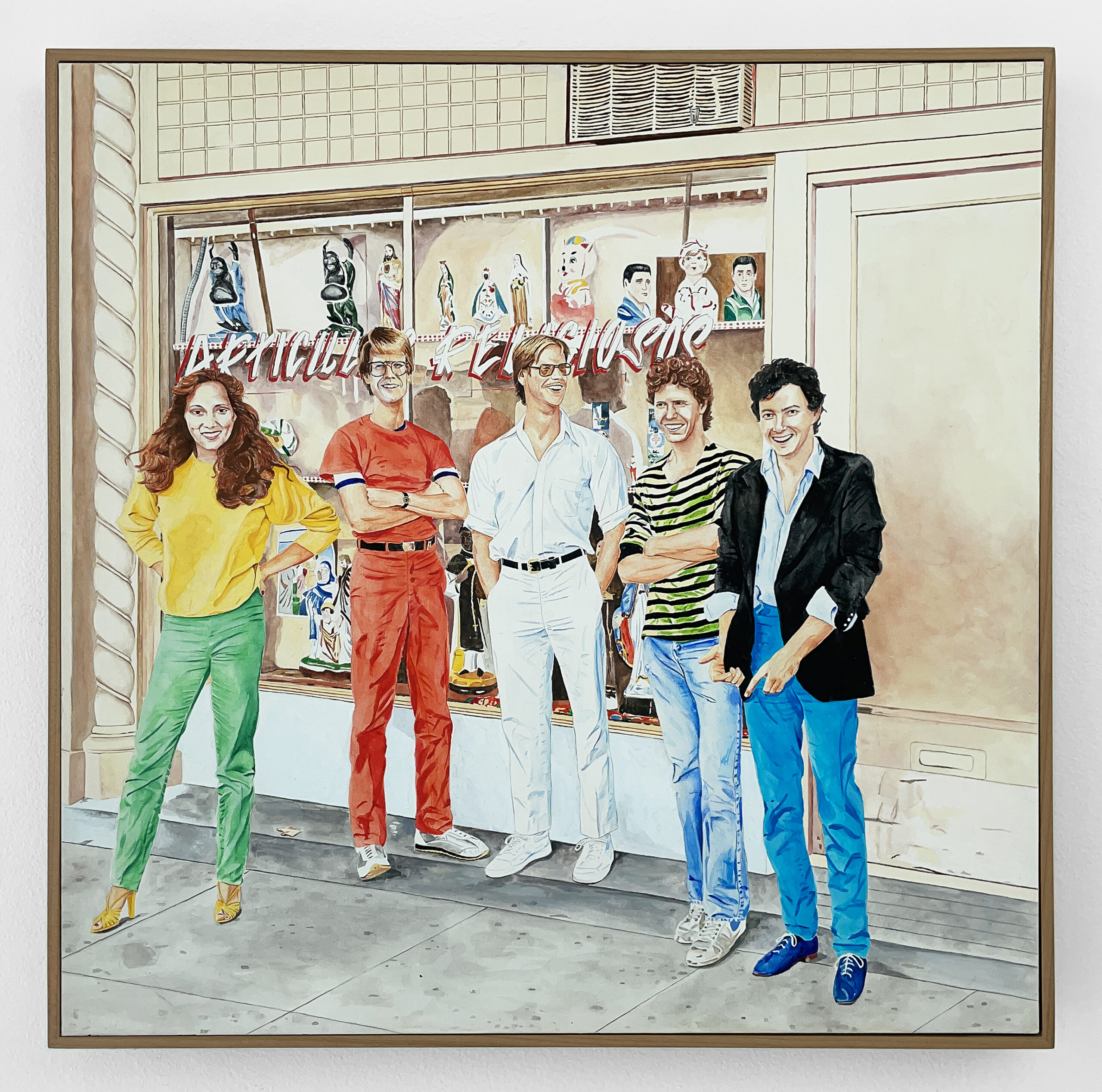 Born and raised in Stockport, England, Taggart studied at Torquay College of Art, Devon, and Cambridge College of Art, Cambridge, England. Work as an illustrator followed, with his art featuring on the covers of books, magazines and record albums.

At age 22 in 1977, Taggart came to Northeast L.A. He planned on staying for three months, but recently marked the  45th anniversary of his arrival in NELA. The home in Glassell Park where he lives today with his wife and daughter is not far from the house where he stayed when he first arrived.

Taggart was captivated by the light of Southern California – a sharp contrast with the overcast skies of his native England. In the paintings from the 1980s, he captured the brightness by making heavy use of shiny acrylic paint.

He said he was also captivated by NELA’s various landscapes — the way a neighborhood like Glassell Park can feel like countryside, with the booming downtown L.A. just minutes away.

“It’s the visual for me, the way it’s this big city and yet there’s all these different areas to it,” Taggart said. “When I’m driving around Eagle Rock, especially on Colorado [Blvd.], it’s such an interesting place, the way it could be somewhere else completely, but it’s in Los Angeles.”

Taggart is not affiliated with a particular gallery though the ODD ARK gallery has an exclusive agreement to manage his archives. He said he feels free to pursue his own artistic interests rather than the demands of an exhibitor. Recently, he has been illustrating with pencils. He still derives inspiration from reference photos such as those he took for “Rochelle and Sandy.” But whether he uses his own photos or images from books, he likes to stray from reality.

“I’m doing a lot of improvising and invention where it moves away from the source material,” he said.

You can find more about Taggart and his work on his website and  Instagram, where he regularly shares work from throughout his career.

Pablo Nukaya-Petralia is a writer and editor from Los Angeles, CA. An Eagle Rock native and graduate of Occidental College. He regularly covers local art and culture while also working as the social media manager for the Boulevard Sentinel. Feel free to contact him at ppetraila@me.com with tips and news.

Pablo Nukaya-Petralia
Pablo Nukaya-Petralia is a writer and editor from Los Angeles, CA. An Eagle Rock native and graduate of Occidental College. He regularly covers local art and culture while also working as the social media manager for the Boulevard Sentinel. Feel free to contact him at ppetraila@me.com with tips and news.